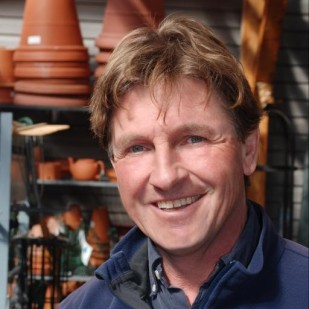 Paul is the eighth in a family of ten, the rest still lives in England. Paul moved to the U.S. when he met his wife Kristine, almost 30 year’s ago. Paul’s gardening career goes back to his childhood. His mother, Barbara, was a keen gardener, an active member of the RHS, and from her, Paul learned all the basics as a child in large Edwardian Homes. He has been gardening ever since, both professionally and for pleasure.

Presently, Paul runs a garden center in Clarks Summit, Pennsylvania, called Greystone Gardens. It features a unique collection of plants and gardening accessories. Greystone Gardens can be visited on the web at http://www.GreystoneGardens.biz

In regards to his TV work:
Paul has been featured on local television on “WNEP’s Home & Backyard” for well over 800 episodes now. Paul has also worked with WGBH on the PBS Emmy award-winning program, “The Victory Garden”, America’s premier gardening show. Additionally, Paul has appeared on CBS’s Early Show to promote his gardening talents. Paul has won Garden Globe awards for his TV work. The award is given by the Garden Writer’s association for work of an outstanding quality. The PBS production is nationally broadcast in all 50 states.

Paul’s teaching experience is apparent in his succinct “how-to” segments, which help viewers see gardening and their gardens in a creative light. Paul’s love of the art of gardening shines through, along with his British humor and energy. He adds a personable touch that makes gardening attractive to those who would never dream of watching such a program!

Paul enjoys all kinds of outdoor activities, including golf, tennis and soccer. He particularly loves to ride his snowboard and has been teaching at Elk Mountain for the past few seasons. Late winter is spent recuperating and reading history books!

Paul was born in London, England on October 15, 1956. He studied at Warwick University and London University. He holds an honors degree in Psychology and Education and further post graduate studies in Education. Paul holds the Royal Horticultural Society’s Level 3 Certificate of Horticulture. Paul is also a certified arborist (ISA). He has taught in public and private schools in England and the USA. Paul presently lives Clarks Summit, PA with his wife Kristine. Paul has two boys William (19) and Anatoli (21). He has two dogs, Fergus and Lily and a feral cat called Fiona.