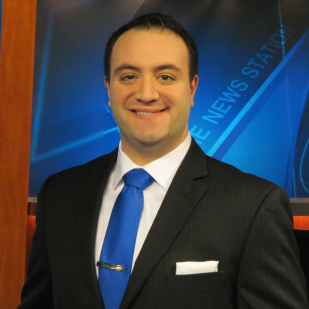 Landon J. Stolar joined Newswatch 16 in July 2015 as the Weekend Sports Anchor/Reporter and he couldn’t be happier to be on the east coast. The New Jersey native has seen his career take him all over the country, from New York to Montana to Iowa.

Landon is an Emmy-nominated journalist who comes to WNEP from KGAN/KFXA in Cedar Rapids, where he sat in as the Sports Director for a year. Before moving to the flat corn fields of the Hawkeye State, Landon worked in mountainous Rockies as the KTVM Sports Director for NBC Montana in Bozeman. The mountains in Pennsylvania are a welcomed, yet familiar site.

Landon joins a long list of WNEP reporters who started telling stories at the S.I. Newhouse School of Public Communications at Syracuse University. That’s where he began his professional career, contributing to ESPNU’s Campus Connection coverage. From 2008 through 2009, Landon was also the voice of the Falmouth Commodores, a franchise of the Cape Cod Baseball League.

Landon is a life-long fan of Syracuse Orange basketball and football, as well as the Dallas Cowboys, New York Mets and New York Knicks.