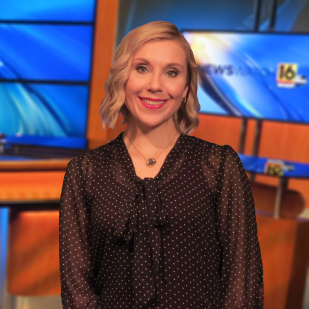 Kerry Kearns joined WNEP’s team in 2011 as a producer for Newswatch 16 at 4. Since then, Kerry’s taken on several new challenges, including producing special news features on women’s self-defense and interviewing her news idol, CNN’s Jeanne Moos.
In 2016, Kerry stepped in front of the camera as Newswatch 16’s official taste tester: putting all sorts of new food products to the test. Getting out among the viewers and asking them to try weird food is a task she loves. She also spearheads the new “16 To The Rescue” segment. In it, she helps area shelters and rescues find homes for some of the animals in their care. Kerry has been in the news biz since 2001 after graduating from Mansfield University of PA.
In addition to seeing her taste test appearances every Tuesday on Newswatch 16 at 7, people can also find her on stage. Kerry has been acting in theatre for several years and has performed in dozens of productions across Northeastern Pennsylvania; from comedies like “Sylvia” to her favorite show “Noises Off.”
Kerry is an animal lover and volunteers her time with the Adopt-A-Boxer rescue organization.
Kerry also enjoys hiking with her dogs or doing downward dog in her favorite yoga studio.
Kerry grew up in Shamokin, Northumberland County.