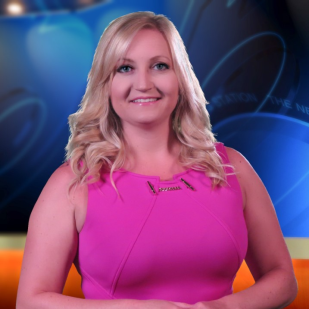 Courtney’s career at WNEP started off when she interned in the Sports Department in the Spring of 2005. Then in June 2006, she was hired as an editor working behind the scenes and then filled in as a photographer helping out with breaking news or sporting events. Courtney’s goal of becoming a sports reporter started when she took over the sports feature Inside Track in 2008. Since then, she helps out covering all kinds of sporting events from HS football and basketball to the NASCAR races at Pocono. Now, you’ll see her out doing news stories as well as covering local sports.

You may have noticed Courtney’s absence for a bit. Courtney got married in 2017 and joined her husband, Darren, in North Carolina where he was stationed at Fort Bragg serving his country in the U.S. Army with the 82nd Airborne Division. Now, they’ve returned home and Courtney is thrilled to be back covering news and sports for WNEP.

Growing up in Susquehanna County, an alum of Mountain View High School, Courtney has a passion for local sports in Northeastern PA and understands how important it is for viewers to be able to see their school and kids in the highlights each night. It is always a great feeling when viewers tell you how much they appreciate WNEP and it makes you want to work harder for them.

Courtney has always been a big fan of sports but besides being a racing fan, she’s a huge Philadelphia Eagles fan! It makes for great camaraderie with the other members of the Sports Department.

If you want to get in touch with Courtney or have a story idea, you can email her at courtney.harrison@wnep.com