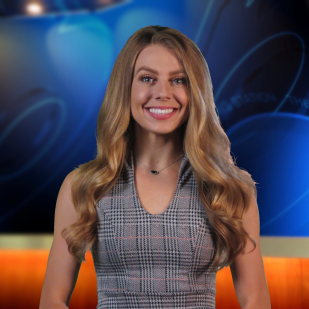 Brit joined the Newswatch 16 team in September 2019 after spending almost 2 and a half years covering Carbon and Monroe counties for a cable station. Before moving to Pennsylvania, Brit grew up in Portland, Maine and attended Emmanuel College in Boston. During Boston years, Brit played college basketball and Interned at WHDH7 Sports. There, she made her on-air debut interviewing Pablo Sandoval at Logan airport.

Despite dreams of becoming a basketball reporter for the Big10 or the ACC, Brit fell in love with Pennsylvania, local news and her now husband, Nick, while working in Carbon County. The Purdys live in Columbia County with their three dogs : Cash, Coco, and Hunter.
When she’s not working you can find Brit hiking, baking, seeking out new restaurants and coffee shops or walking dogs at the PSPCA in Danville.